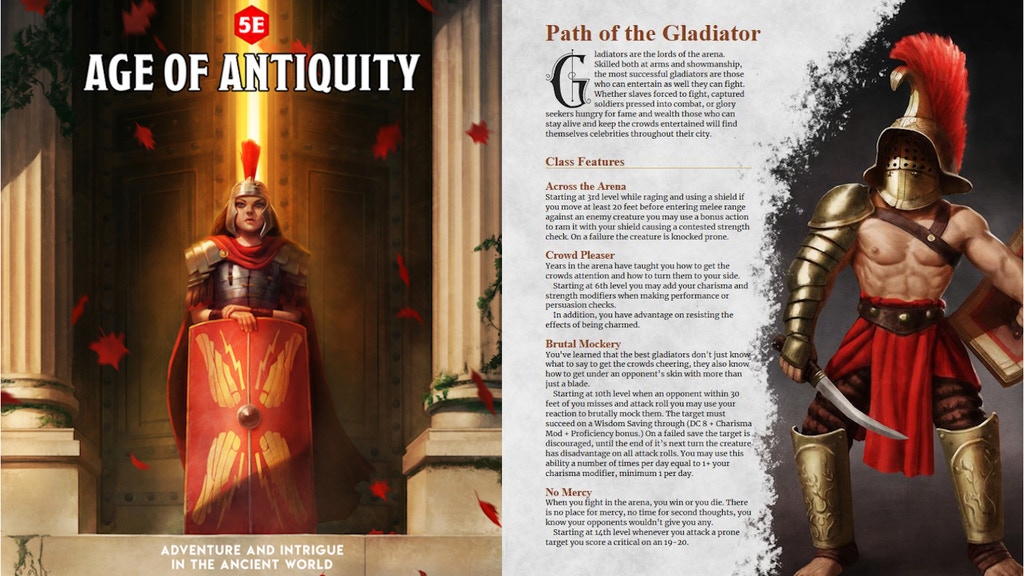 Age of Antiquity: An Ancient World Setting for 5E.

Latest Updates from Our Project:

Hope you've all had a fantastic month! I'm back today with a smaller update than last time.

We have received a lot of new art since the last update. The Chinese Deities are now fully complete and Ren Tu is now working on finishing the Egyptian Pantheon. The Celtic Pantheon has a single piece left that should be finished in the next week. In addition Cahn has completed all the background character art. Kate and Daniel are still hard at work getting the Sumerian and Greco-Roman Pantheons finished!


I also want to share a pair of creatures that will appear in the setting, aside from the Gorgon on the initial Kickstarter we hadn't given you a preview of the monsters that will be encountered. So allow me to introduce the Qilin and the Shahamaran!


In other good news Alyssa Faden, master cartographer, has let me know the first city sketches will be coming in within the next few weeks and I will share those will all of you during the next update. In addition, George Mason (The Reclusive Cartographer) is going to be joining the team creating a few smaller town maps for the book.


Next month we will have another PDF preview for all you, this time featuring the Parthian Empire!


As always, thank you so much for your support!


I hope you’re all doing well and that 2021 has gotten off to a great start for all of you. I have several announcements today.


First the good news, the preview PDF has been posted! This preview shows off parts of our Chinese and Egyptian culture sections, multiple backgrounds, magic items, gods, and of course beautiful art! Originally we had only intended to release a 16-page PDF this week, but we couldn’t decide what to parse down so we doubled it.

You should have all received an email from Backerkit with a link to the download a few minutes ago. (If you didn’t, I’m about to feel quite the fool.)

We’re going to continuing bringing you previews until the final product is released later this year and have two more preview PDFs planned for release.


But that brings us to the less good news, the final book will not be ready by the original April estimate. While the manuscript is nearly complete the artwork is not. As we are sure you’ve noticed we have been announcing new artists even in our most recent updates. This is our first project and we underestimated the time great artwork and cartography would take, especially in light of Covid-19 disrupting the personal lives of several of our long-term artists.

Our updated target for the finished PDF is Q3 of this year with the hardcopies following as soon as production is complete.

We also originally planned to launch the PDF to backers once the physical hardcopies were in hand and being shipped, we now intend to release the PDF as soon as it is complete so that you may begin using it while the books are still in production/shipping.

We apologies for this disappointing news.

This does bring a sliver of good news for a few of our Pontif Maximus backers however as we have only received character ideas from 9/20 of you! For the remaining 11, we have messaged you all individually and will do so again. If you see this please get your information to us as soon as possible. The forms to fill out were emailed.

If we do not receive your character concept by March 31st we will not be able to guarantee your characters artwork being completed in time for printing.

Finally, we’ve had a number of backers message us about including fantasy races in the setting. As it stands the world is human only, at least in regards to the standard 5E races, but we know many of you and your players may eventually want to include more than that. As such we have decided to create a small PDF that details how we best believe that standard fantasy races such as dwarves, elves and orcs may be included in the world. This will be released for free to all backers when the final product launches later this year.


We apologies again for the delay and thank you all for your support and patience, the team is excited and determined to deliver a great product!


I hope you all had a wonderful holiday season and a great New Years under the circumstances.


I'm happy to announce we have another new artist joining the team, Canh Nguyen. Canh is doing the artwork for all of the character background options in the book!


The first week of February I will have a larger update for all of you that will include a preview PDF for you all to download that gives more backgrounds, items, and details on both Egypt and China!


As always, thanks for your support!

Hope you all had a great Thanksgiving under the circumstances.

I have a big update for you all today!

I have a pair of magic items from the book to share with you and a new artist, Ichigo, to introduce. Ichigo will be doing the majority of Magic Item art in the book, please check out her social media!

A number of you have been asking for more page previews in lieu of just artwork and we are happy to deliver! Meet Marduk, head of Parthia's primary pantheon.

The incredibly talented Alyssa Faden will be joining the team as cartographer! She's created a trove of highly detailed city maps and will be working on a massive Roman City, Telesinia, for Age of Antiquity. Please check out her Facebook linked above!

While brainstorming magic items Marcus and I came up with far more than the 150 that will be included in the book, many from civilizations that aren't included in this first volume, as such we've created a Patreon to share our Magic Items (and occasional creatures!) that aren't to be included in the book proper. If you like the items we've shared so far please consider checking it out. This month we will be having a holiday theme. January will be Indian-Subcontinent themed!

Backers, I need your completed surveys!

So far only 6/20 of you have responded with details about your original character. We need this information as soon as possible to ensure time to have your artwork completed. I will send out another reminder email next week and one more in January but please have your survey complete by January 31st.

I also want to share a finished piece of backer art! Meet Legatus Astranacus, head of the 6th Legion and military governor of Telesinia.


That's all for today!

Best wishes to all of you this holiday season, I'll be back with another update for Christmas/New Years.

As always, thank you so much for your support!


Hope you've all been well. I know I said this update would include items however we've pushed those back a few weeks to be included in a much larger update in December that will include a few new announcements as well!

To hold you ever in the meantime I have another beautiful new piece of art to share with you, Nüwa! Though he was listed on the initial Kickstarter this is the first piece of Ren Tu's art that we've shared publicly, it's also the first of the included Chinese deities we've shared artwork for.

Also, we still have 6% of you outstanding on your Backerkit surveys, as stated previously we will be keeping the survey open for some time but please fill these out at your earliest convenience!


Have a great weekend everyone, I'll be in touch soon.